All Collections
Crypto Basics
What is DeFi?

You might have heard this term on the news, at a holiday dinner with your relatives, or on one of the many social media platforms, but what does it actually mean?

Short for “Decentralized Finance”, this term describes the explosion of financial products built using smart contracts on decentralized blockchains. These financial products are characterized by their open, borderless, non-custodial, censorship-resistant qualities, in addition to a lack of intermediaries. Purely designed for anyone on the planet to use, these protocols replace the all-to-common intermediaries of traditional finance, which collect fees and create friction for users at every turn.

What sort of financial products are being built in DeFi?

Originally, the first use-case in the DeFi world was a simple borrow/lending protocol through the MakerDAO project. Today there are a multitude of projects involving liquidity aggregation (like 1inch), yield generation, borrow/lending protocols, derivatives (such as options and futures), and synthetic tokens, just to name a few.

How did this DeFi revolution start?

The beginnings of DeFi start with cryptocurrency itself. In 2008, Bitcoin was released to the world, sparking the very beginning of a new financial renaissance. For the first time, people around the globe were able to reach consensus on a shared, public ledger, without any need for a third party. By 2014, Bitcoin gained so much popularity that developers began experimenting with their own blockchains. This led to the creation and rise of Ethereum. Ethereum is the world’s first “global computer”, allowing anyone to run a custom-built program on borrowed power. Built by a Russian-Canadian programmer named Vitalik Buterin, Ethereum was a revolutionary breakthrough in itself. It’s smart contract compatibility opened the door for any individual with a laptop to build decentralized financial products, businesses, DAOs (decentralized autonomous organizations), and more on top of a secure, open-source blockchain.

Despite this amazing capability, it wasn’t until several years later that DeFi really took off. This is due to another critical component: The Automated Market Maker (AMM). First written about by Vitalik in 2017, AMMs are an open algorithm that both determines a price and facilitates a trade between two or more digital assets. With this technology, buyers and sellers can trade assets without having to trust a centralized exchange or clearinghouse. AMMs were the puzzle piece that was needed for DeFi to really take off. Over the last several years, DeFi protocols have exploded in both popularity and Total Value Locked (TVL).

At this time of writing, over $80B is currently locked in DeFi, with future projections to be magnitudes higher. 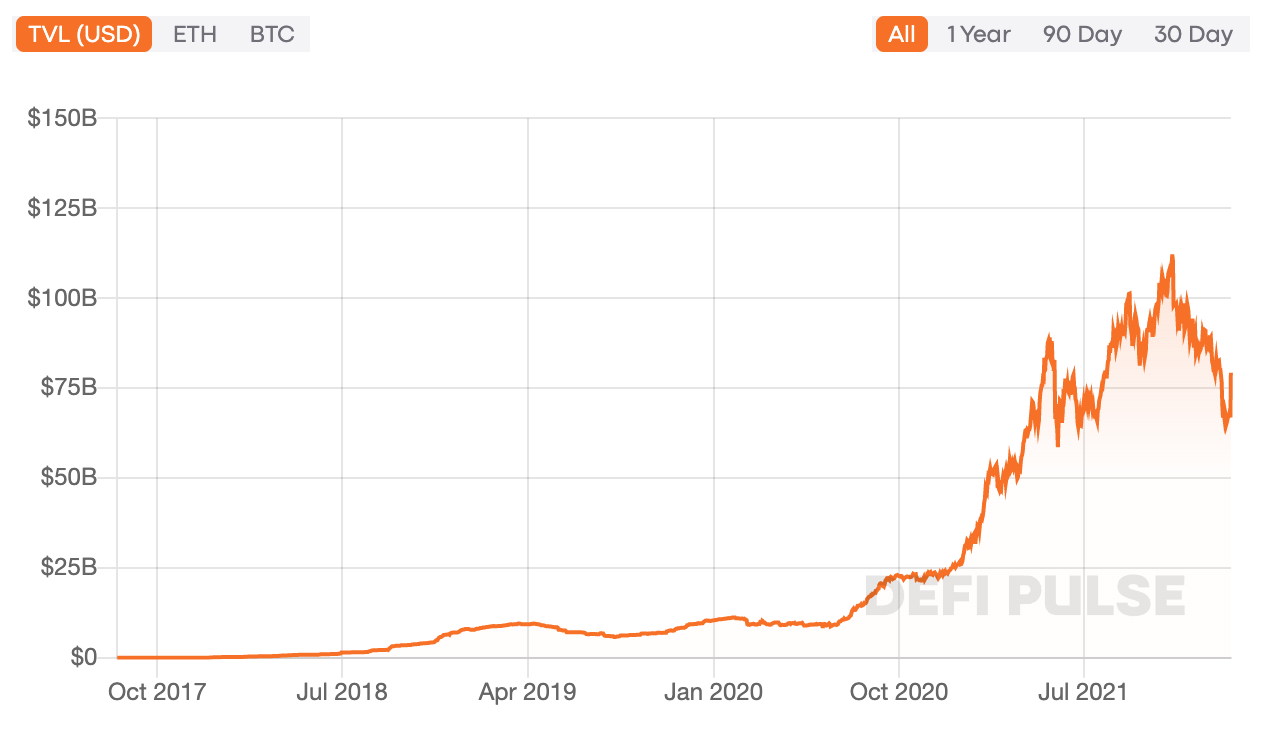 Where does it all go from here?

Still to this day, DeFi is considered to be in its infancy. That said, it is growing exponentially. New evolutions of Ethereum, “Layer 2” solutions (like Optimism and zkSync), and side chains (like Polygon) are all working to strike the perfect balance of security, decentralization, and scalability. Once further improved, this will further accelerate DeFi’s growth and user-base. Major institutions are now showing interest in DeFi. This involvement will bring traditional finance closer, while providing additional resources for further innovation to the industry.

To say the least, the future of DeFi is bright!

Questions, comments, concerns about DeFi? Feel free to reach out in our live support chat!